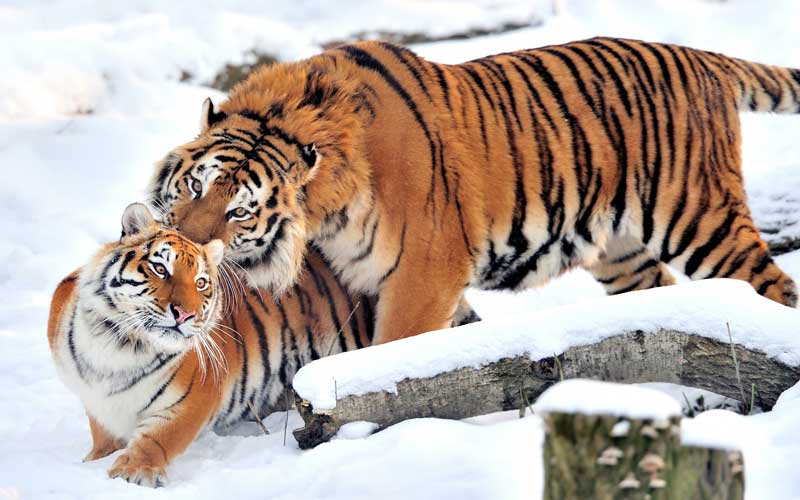 Tigers have several ways in which they communicate with each other, and not all are vocalizations. For example, they may arch their backs and put out the claws when they feel threatened, or they are ready to fight. This demonstration is a great way to scare other tigers or other animals in the area to make them back away and avoid a fight. They would rather warn them instead of engaging in a fight.

The social relationships are one of the core functions of living beings, which is manifested mainly among mammals. Based on this, Tigers need to communicate with each other to provide and receive information that allows them to perform some functions and increase their chances of survival.

For example, it is a fact that they are highly territorial and respond aggressively if any individual approaches their domains, but what they do to avoid the intrusion? Tigers can do three things in the trees or rocks: leave marks with the claws, deposit their feces or spray a mixture of urine and a secretion from an anal gland. This non-verbal communication is a sign that tells marauders that they are entering an occupied territory, and they can get information about the gender, identity and reproductive status of the tiger or tigress that left that scent in the tree or rock. That’s why females that are just about to get into heat increase the frequency of spraying, so males know that they are available to mate.

The smell of urine lasts up to 40 days at the site deposited, which by the way can also be tall grass or even other tigers. The smell is also very useful for puppies, as each has a characteristic smell, they can recognize and trace their mother through her urine. Cats are known to have odoriferous glands on specific parts of the body such as the tail, anus, lips and the region between the toes, and the Tigers are no exception. 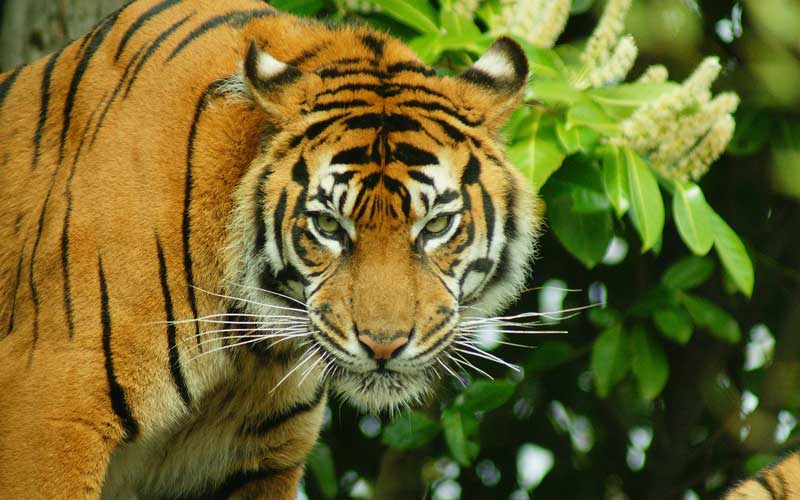 Other communication resources are some movements and positions of the body. When a tiger is calm and relaxed, the tail hangs languidly. However, if it has to defend its territory, it reacts aggressively, exposing its canine teeth, widening the corners of the mouth, flattening or placing the ears backward and enlarging the eye pupils, a set of positions known as the “Flehmen response.”

Sometimes they are with their ears back, their heads up high, the paws down, and showing their teeth. These are indicators that a tiger is ready to pounce on some prey. If they are curious about other animals in the area, they will have their ears up, and their tail held up high instead of the usual low-lying position. This attitude shows that they are on alert but not feeling threatened at that time.

Tigers produce roars in the hyoid apparatus, located in the oral cavity, opening and closing the mouth gradually.

Tigers have the ability to emit a wide variety of vocalizations to communicate over long distances in different contexts. Although roars are the best-known vocalizations, they make this sound infrequently. Typically, tigers roar when they want to attract attention (a mother calling her offspring, for example) and when their intent is to provide information about their presence and location. They can also roar during mating, in hostile situations and to communicate sexual receptivity. 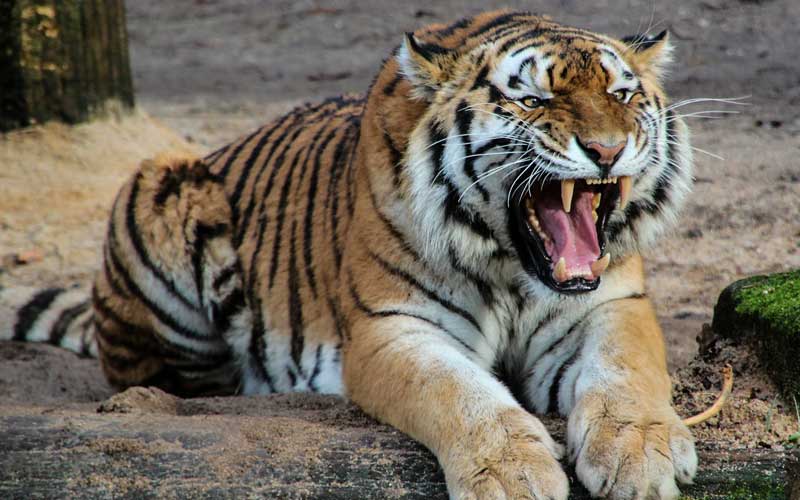 Tigers produce roars in the hyoid apparatus, located in the oral cavity, opening and closing the mouth gradually. The loudest roar is short and involves keeping the mouth open and the canine teeth exposed. This sound, produced by the expulsion of air, is heard by all animals and humans about 3 miles away and is usually repeated 3 or 4 times sometimes with longer durations than the initial. Thanks to these vocalizations, scientists can identify tigers. High-frequency sounds are common in long distance communications.

There are other types of roaring less loud and “frightening.” One of them sounds like a cough and Tigers make it when they are nervous because of other animals or challenge humans. The groans are even fainter, emitted with the mouth partially or entirely closed while walking with the head down. They can be heard at a distance of up to 400 meters.

Other vocalizations are purrs, grunts, blows, and others. A little-known sound is the “prusten,” a low-frequency sound only heard at close range and used in friendly contexts.

MOTHERS COMMUNICATING WITH THEIR OFFSPRING

Moaning is another sound that Tigers use. The mothers often use it with their young to get them follow their directions and to try new things. Males may use moaning during the courting process to make females feel relaxed.

They will often be heard snarling when they feel they are in danger. A mother is very likely to use this form of communication to keep other animals and even tiger males away from her offspring.