The tiger is the largest cat in the world. Some subspecies are bigger than others, but most surpass the size of other felines, including the lion. You probably knew this, but if you want to know the basic facts about the national animal of India and Bangladesh, read carefully:

2.- Tigers belong to the taxonomic order Carnivora, the family Felidae and the genus Panthera.

3.- They are solitary animals that only meet in mating season or very specific situations.

4. Three out of the nine subspecies of tigers living in the world at the beginning of the 20th century are already extinct.

5. Three out of the six extant subspecies of tigers have a conservation status as critically endangered species.

6. All subspecies of tigers are extremely territorial.

7.-Tigers feed on several animals, but they prefer ungulates.

9. Each tiger has a unique skin pattern. The coat pattern of each specimen is different; this means that the dark stripes are in such way that there are not two identical designs.
This method is one of the easiest ways to identify individuals.

10. The stripes on their coat have the purpose of camouflaging the Tigers with their natural environment so they can sneak up on prey.

11.- Their vision in the dark is about six times better than that of humans.

12. Tigers can consume up to 40 kilograms of meat in a single meal, but they usually eat a smaller amount.

14.- White tigers are not a subspecies, but only specimens whose coloration is due to an alteration of the pigment gene. They are extremely rare in the wild because both parents must have the mutated gene to produce white offspring; This is the reason why white tigers are more likely to develop severe health problems as well as physical deformities than the regular ones.

15.- Tigers are very territorial and defend their area. However, the territory of some females may overlap.

16.-The most endangered tiger subspecies is the South China tiger. The only specimens alive are in captivity.

17.-All tigers subspecies are threatened. The species Panthera tigris is in danger of extinction.

18. In the 20th century, three subspecies of tigers became extinct: the Javan tiger, the Caspian tiger, and the Bali tiger.

19.- Tigers reach running speeds between 49 and 65 km/h for short periods.

20.- Their roars can be heard at a distance of 3 kilometers or even more.

22.- Besides being the national animal of India and Bangladesh, it is also from Vietnam, Malaysia, and South Korea.

23.- Tigers are solitary-but-social creatures. They spend most of the time alone except during the times for mating or in the case of females when raising their offspring.

24.- The word “Tiger” means arrow. The word tiger comes from the Greek word “Tigris,” which has its origin in a Persian word that means arrow.

25.- The oldest ancestors of these cats date back 2 million years old.
The oldest fossils found in China of the first Tigers a are about that old.

26.- There is a small population of Bengal tigers, but it gets worse than this. Only around 2,000 Bengal tigers live today in the Indian subcontinent. However, it is the subspecies with the largest population.

27.- Hybrid Tigers. The “Liger” is the result of interbreeding between a male lion and a tigress while a “Tigon” comes from a female lion and a male tiger. Most of the time the males of these two hybrids are sterile, but the females can breed successfully. 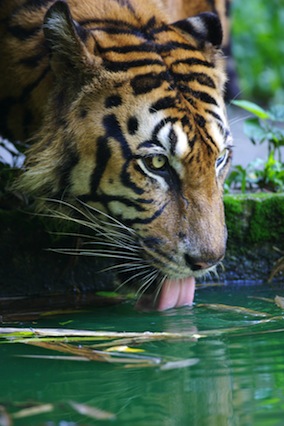 28.- Blue Tigers. The Maltese or Blue Tiger has a black and blue coat coloration similar to gray-bluish of the Maltese cats which gave them their name. They are not a subspecies but a genetic mutation of the South China Subspecies, which is the most critically endangered subspecies.

29.- Tigers have to struggle for food. It may surprise you that these skilled hunters only make one kill out of every 20 attempts.

30.- Tigers are excellent swimmers. Contrasting most cats, they like water and spend some time during the day relaxing in ponds, streams, and rivers to cool off during hot days, and they can swim pretty fine and are even capable of catching or carrying prey through the water.

31.- Some Tigers are human killers. Tigers have killed people more than any other cat in the world, but the continuous invasion of their habitat and the fact that they inhabit one of the most populated areas in the world are factors to consider on their behalf.

32.- Some Tigers are famous. Tigger from Winnie the Pooh series is one of the most recognized tigers in the world. Millions of dollars are made annually from the sales of toys, games, and shows featuring this character.

33.- Tigers are beloved. The tiger was named the favorite animal of people through a poll conducted by Animal Planet a few years ago. The dog was the animal closest to this top ranking.

35.- There is sexual dimorphism in Tigers as females are smaller than males.

36.- According to WWF, there are 5,000 specimens in captivity only in the U.S. A number 25% larger than the population of tigers in the wild.